PROPERTY OWNER IS NOT NECESSARILY LIABLE FOR WRONGFUL INTERFERENCE

A party subject to an easement may continue to use its property in a reasonable manner. It may not, however, interfere with the easement holder’s use of the easement. Such interference may subject the party to liability for damages resulting from the wrongful interference. For example, liability for wrongful interference with a road easement would likely exist if the property owner built a fence across the road. On the other hand, the property owner probably could place a gate across the road.

But is the property owner required to take affirmative steps to facilitate the easement holder’s use of the easement? Until recently, no Washington court had addressed that question. In Zonnebloem, LLC v. Blue Bay Holdings, LLC, 200 Wn. App. 178, 401 P.3d 468 (2017), the Washington Court of Appeals held, as a matter of law, that some types of affirmative action are not required.

Usually, an easement must be in writing. This is an express easement. But there are exceptions to this general requirement. One exception involves a use established over a period of ten years. If the required time period – and other requirements – are met, the user has a prescriptive easement. 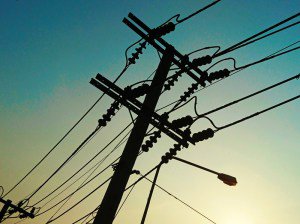 FACTS OF THE CASE

The Zonnebloem case involved a prescriptive easement for an electric power line. Blue Bay and Mandl own adjoining commercial buildings in Pouslbo, Washington. Zonnebloem owns a parking lot behind these buildings. A power line runs from a pole on Zonnebloem’s parking lot to the Mandl building, then to the Blue Bay building. Blue Bay replaced its building, requiring it to disconnect the power line.

When the new building was completed, Blue Bay asked the electric utility, Puget Sound Energy (PSE), to reconnect the power line. To do this, PSE required that Zonnebloem and Mandl grant to PSE an express easement for an area two feet on either side of the power line. However, Zonnebloem and Mandl requested a termination clause in the express easement, to which PSE would not agree. As a result, no easement was executed, and PSE did not reconnect the power line. Thus, Blue Bay was required to install a power connection along a different route, at a cost of over $10,000. 200 Wn. App. at 181-82.

As indicated above, the owner of the servient estate may not unreasonably interfere with the easement holder’s easement use. Reasonableness requires a balancing of two interests: “the necessity of the restraint for the protection of the servient estate against the degree of interference with the easement holder’s use.” 200 Wn. App. at 184. “Actions that make it more difficult to use an easement … are prohibited …, unless justified by the needs of the servient estate.” Id. (quoting Restatement (Third) of Property: Servitudes § 4.9 (2000)). One remedy for unreasonable interference with an easement is a claim for damages. Id. (citing Restatement (Third) of Property: Servitudes § 8.3). Therefore, if Blue Bay can show that Zonnebloem’s and Mandl’s failure to grant an easement to PSE unreasonably interfered with its easement, damages ought to be available.

Must the owner of a servient estate take affirmative action to protect the easement holder’s use of the easement? No Washington court has previously addressed this issue. 200 Wn. App. at 185. The court of appeals acknowledged there may be circumstances requiring affirmative action by a servient estate owner. But not in this case. 200 Wn. App. at 186. It found two factors to be significant. “First, by granting an express easement to PSE, Zonnebloem and Mandl would relinquish a valuable property right … to a third party.” “Second, the easement that PSE requested and that Blue Bay demanded was for an area broader than the area of use that created the prescriptive easement.” But the court noted that Blue Bay offered no authority for requiring either of these. 200 Wn. App. at 187.

The post Property owner is not necessarily liable for wrongful interference with easement for declining to affirmatively facilitate easement use appeared first on The Gillett Law Firm.